So, on Sunday, I did something interesting. Given how much of a shock this is likely to be to those who read my updates on a regular basis, I should probably point out that it wasn’t all that interesting. I didn’t take up abseiling, fight a shark, beat the world record Pac-Man score using only my toes, or end global poverty by cloning chicken kievs. Nor did I create an animatronic cave troll robot, get selected for the Chinese basketball team, transpose Handel’s Messiah for the didgeridoo, bake a doughnut the size and shape of a Komodo dragon, swim to Singapore, write and perform a one-man version of The Seven Samurai, graft a bee’s head onto a cat’s body using cutting-edge transplant surgery, steal Condoleezza Rice’s identity by forging a passport using post-it notes and a purple Crayola, invent a spoon so efficient it makes breakfast instantaneous, steal the crown of England just so I could carve “Philip is a loony” on the inside rim and put it back, or fold myself up really small and ride around in unsuspecting pedestrians’ pockets all day fiddling with their mp3 players. In fact, given how many more interesting things there are which I could have done, I feel my entire initial statement has been called into severe doubt, and needs revision.

So, on Sunday, I did something boring. I went to a museum.

Unlike – I suspect – many of us, this wasn’t the first time in ages I’d done such this. It really wasn’t all that long ago that I was wandering around Edinburgh’s museum up the road from my flat, happily making a spelling-names robot spell out my name in wooden blocks and watching Dolly the sheep’s macabre rotations in her vat of formaldehyde. But it was definitely the first time I’d done such a thing in Australia, and as such marks another triumphant tick on the “do everything possible in the entire world” checklist. There’s still some way to go, mind. “Provoke a polar bear using a taco” looks tricky.

However dreary I may have made the activity sound with my list of ridiculous exploits up the top, wandering around the Museum of Queensland wasn’t actually dull in the slightest. It’s the sort of thing I wouldn’t really think to do that often, and I imagine only occurs to most people when they happen to either be in a strange foreign city, or need somewhere to take the kids on the weekend. But it’s incredibly stimulating. You walk through a museum door, and you’ve put yourself in a place – for free! – that has been explicitly designed to teach you the most interesting stuff possible using the medium of…things. How fantastic a concept is that?  Even if you look at the kiddie activities and some of the worthier exhibits – the history of the Victoria Cross – with a certain degree of scepticism, it’s almost impossible not to get interested in at least something, and find ideas and new thoughts bouncing around the insides of your skull as a result of the information and spectacle on offer. Or maybe I’m just saying that because I’m automatically programmed to adore anything with a big dinosaur skeleton standing in the foyer. I love dinosaur skeletons, me. 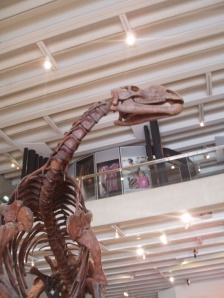 For the most part, description of the museum is probably best left to photographs and a vague instruction to pop your head in if you ever happen to be passing through. Additionally, the variety of death put on cheerful display took some getting used to – they’d lined up stuffed deceased samples of pretty much all the world’s major types of fauna, put them in a massive queue with the biggest at the front, and dropped a huge glass box over them. It was like Noah’s Ark: The Mausoleum. But I will take a couple of moments out to detail some bits which evaded the camera lens.

Firstly, the Victoria Cross exhibit mentioned above. It’s a dubious subject to glorify, but the museum handled it well. It was presented, quite humbly, as a collection of letters, biographies and personal effects of three Australian soldiers who’d been awarded the VC for bravery in the First World War. Of the three, only one made it out alive, and so most of the letters made for rather sobering reading…except one. Try this on for war-heroism size:

“I had a funny game of Football yesterday. Two of the players got wounded and were carried to hospital. Just as we started one chap happened to kick a bomb which exploded giving the two I mentioned some nasty wounds. We won the game” – (Paddy Bugden, V.C., letter to his sister, 1 June 1917).

Well, they won the game. Isn’t that nice? But seriously, read that back. “One chap happened to kick a bomb”. It’s like something out of a kids’ cartoon. The clever cat swamps the ball for a bomb and the stupid dog kicks it and blows up his own face while muted trumpets play an amusing fanfare. But this happened.

The other exhibit that really caught my mind, giant Muttaburrasaurus (yup!) bones notwithstanding, had nothing so unintentionally comic to relieve it. It was a display – no photographs allowed, I believe on Aboriginal religious grounds – of the mission by Burke and Wills to explore and conquer the Northern Territory of Australia. The whole thing was accounted fantastically interesting at the time, even meriting some hoo-ha in the London press. But most astounding to this modern viewer was the anti-Aboriginal racism coming up time and time again in the accounts of the voyage, particularly Burke’s. They weren’t just prejudiced, they were morons – their racism completely undermined their chances of success, yet they kept it up incessantly. Tribes of friendly indigenous people came up to offer them welcome, help or trade, only to find themselves rejected or persecuted time after time. Invitations to a welcome ceremony were spurned as a “dance” which the noble explorers had no time for. Natives who approached the starving party with fish for trade were shot at until they smartly ran away. Even when the party’s supplies ran out and they were driven to living off the native vegetation, their diaries referred scornfully to having to “live like blacks” for a while. It’d be like going to a dinner party in someone’s house, and then refusing all the food because you didn’t like their kitchen. I’m sure the museum was keen to play up the welcoming nature of the natives in its exhibit, but nonetheless it was a staggering display of narrow-minded bigotry. I just wanted to step back in time, pick up Burke, and shake the little shit until he saw sense. Justly, neither Burke nor Wills survived the journey. Their story was related by the third of their party, Lieutenant King. King spent the last few months after the others died being sheltered by a tribe of Aborigines.

Still aghast at the blasé destructiveness of colonialism, I staggered out into the sunlight. Brisbane’s Cultural Centre is a glorious location, especially in the sun. It’s a huge complex of museum, art gallery, modern art gallery, city library, pavement cafés and performing arts centre, all tied together by walkways and paths so that you can stroll around without having to cross any roads. I did the art gallery after the museum – but again, this makes for better pictures than reading, especially given how subjective appreciation of pictorial art is. Any pieces which I dismiss out of hand may well be your favourite works, and vice versa. So I hope you’ll browse through my photos (already a biased sample) at some stage, and all I’ll mention in the meantime is Ai Wewei’s work “Pillar Through Round Table”, which is everything its title promises – a Qing dynasty round table, held aloft by being impaled on a massive great pillar of wood. Magnificent.

Before I close this off, a brief wildlife update. Once I was done with the art gallery, I wandered out into a little grassy section outside its back door. A particularly boisterous ibis was playing around on the rail by a set of stairs, and I stopped to take some pictures. At one point I stepped back slightly to get the bird in shot, and a slithery scuffling noise sounded from the concrete RIGHT behind me. I turned around in alarm to see a large, scaly tail disappearing under the bush by the side of the steps – bending down, I realised that all along I had been standing right in front of the single largest lizard I’ve ever seen. It was perhaps the size of a large cat, only lower and longer, and it had a kind of chilling reptilian impassiveness. It was beautiful and ugly all at once, I wanted both to get closer and to back nervously away. This, remember, was in a neat little garden by an art gallery, right in the centre of a major city. It was another of those amazing moments, like the possums from a few nights before but even more wonderfully, creepily foreign. I’m definitely not in Scotland any more.

One thought on “Night at the Museum – in the daytime!”