For being the opening of.

…is the first entry in my notebook after I left Brisbane airport in the early hours of Sunday morning, almost three weeks ago. It proves, I think, that I’m not particularly adept at keeping a journal. Nonetheless, I’ll add occasional musings from its pages over these next few posts, to try and spice things up a little.

What I Did on My Holidays – Part 1: Beginnings

The second part of my journey was to be taken in company. The first part was reaching it. Morgan Wegner, one of my chief co-troublemakers in Brisbane, and her fellow Seattleite Russell had begun their adventures a few days previously to mine, spending a few days merrily gallivanting around the Great Barrier Reef. My rendezvous with them was in Adelaide, from whence we were to travel the Great Ocean Road – a famously gorgeous stretch of coastland scenery between Adelaide and Melbourne.

I was not in Adelaide, though. I was in Brisbane. And the difference between Brisbane and Adelaide is that they’re not in the same place. Considering the problem logically, it seemed obvious that what I needed to do was get from the one to the other. And while much of my journey was to take place on Australia’s elephantine rail network, Brisbane-Adelaide is a two day rail trip, and I needed something a little more …straightforward. What about a train that could fly?

5AM in the morning, and by the morning well I guess I mean the last thing at night. Could I just have a moment for a…I guess the thing I distrust about the journal is the confessional aspect. But, I should probably get used to trains, even if all they do is. Wonderful. If they make me dictate an interior monologue, slowing my thoughts to pen-speed to match. To “research” her novels, Virginia Woolf spent time listening to herself think, to figure out the speech pattern of her consciousness. I think I am an inverted take on this; my thoughts adjust to Joyce or Woolf or McGregor, and when I have been reading one of them for long enough I begin to think like them. Currently I think like T-Rex from Dinosaur Comics.

Planes still fill me with complete delight – see my very first ever blog post. I mean, I know they can be cramped and uncomfortable and all, but …I got in a big tube, went to sleep, and woke up several weeks’ walk away. I don’t care what anyone says, that’s fooking witchcraft. I sincerely hope I never lose the ability to be so childishly excited by things. It makes for a great deal of fun.

Anyway, I’ll restrain my flight-hyperbole for now, but only because I’m going to have lots of other things to use all my whimpering glee up on. There is a story being told. And it continues with a blue Mitsubishi Lancer.

Our steed of choice was actually a lot better than we might have feared, coming from a company named Budget Car Rentals. I say “our” – as the sole non-driver of the party, that’s giving me a bit too much credit. In fact, this whole thing was really the two Americans’ trip – they’d planned it long in advance including car rental and where to stay, and as a latecomer I got to happily surf along on the back of their plans without having to do much of…well…anything. Much obliged, guys! 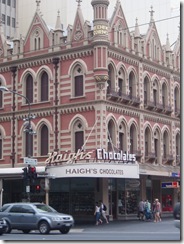 Car obtained, our first night was in this picturesque little city. Tourist-resort Surfers Paradise excepted, this was the first non-Brisbane city in Australia I’d seen. It was a breath of fresh air. Narrower roads, cooler weather (or at least drier heat), buildings made of stone. Next to subtropical Brisbane, it felt halfway to Europe…although nowhere near as much as Hahndorf, on which more tomorrow.

Once we’d taken a glance around and cooed at the pretty buildings, we followed Russell on his favourite activity – a trip to the zoo. Not that I need any convincing to go and squee at animals, y’understand, but Russell’s quite an impressive zoo fanatic, even working at one back home in Seattle. The zoo itself was pretty much a zoo, with the notable difference of having the most photogenic animals in captivity. Seriously, these beasts were camera whores. They just had to see the tiniest flash of a lens and over they pranced, showing off their good sides for the cameras, or posing artfully amidst the scenery. I mean, Jesus Christ, just look at that flamingo! 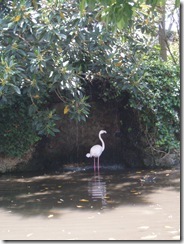 This was our sightseeing pretty much complete; we had a journey to prep for the next morning, after all. We met up with Krista and Laerke, friends from UQ, for food and drinks in a bar that, again, had a much more European vibe than anything in Queensland. I have to say, I was profoundly grateful for this holiday from the subtropical vibe. I like breezes, and stone walls, and small pubs with funny things on the walls. I like being able to wear a jacket of an evening. Over the next couple of weeks, I was to get plenty of opportunity to do so.

We spent this night as I would spend most of that couple weeks, with the exception on nights spent in vehicles; in a backpacker’s hostel. Australia has a fantastic scene for these things, $25-a-night hubs of travelling youths which give you a bed, a kitchen, and the chance to chat to some other people questing, wandering or working around the country. Most of them are German, with the Irish coming in a respectable 2nd. This first night, though, was more about just getting our heads down. We had the Great Ocean Road to travel in the morning.

So I’ll leave us there for now, and pick up the thread tomorrow with tales of Hahndorf, mountains, echidnas, free steak, and the other things which come one’s way between Adelaide and Melbourne…not to mention the world’s best worst radio presenters, and an aggravating little song about Queensland. I reckon a full account of the Brisbane-to-Brisbane trek should cover four or five nice little daily instalments – hope some of you out there enjoy giving them a read.

And may I never grow old, or ungracious

And may I always be amazed by aeroplanes

And never cease to be pleased when the seats have cushions

And may I never grow old.

3 thoughts on “What I Did on My Holidays. Part One: Beginnings.”