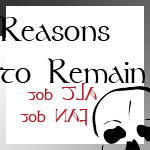 This is what I understand by alternative.

As such, I thought that there was less of it here. You see some black fringes among the mid-teen youth, where the positive pull of the alt-dot is strongest, and you see a lot of those default-metalheads, guys with long hair and a black t-shirt carrying the logo more or less interchangeably of a death-metal group or third-gen console game. And the post-hardcore kids are in evidence, proudly repping the local origins of Parkway Drive. But there’s fewer people pushing the extreme; far fewer magnificently full-on goths who’d look just dandy on the set of Thirty Days of Night. Few skinny-assed, pink-haired twentysomethings keeping the torch of emo burning beyond secondary school. Few mohawks, or where they are, they’re more likely to be hanging floppily down the scalp of a shirt-and-shorts bloke at the train station than standing proudly erect over the gleaming pate of a shiny-studded punk.

As a result, I’d concluded, there just isn’t an alt.scene here in the same way. In turn, my own appearance has tamed; if the night’s cool I’ll still fling a black leather jacket over my Metallica tee, and hang a couple of chains. But that’s about it. I hardly ever boast the bandannas and ornamentation and OTT glam-rockery that I like(d?) to break out back home. Even if something’s an a-normative statement, it’s a lot less intuitively appealing when you’re in a foreign place already, and there doesn’t seem to be any…dare I say it?…infrastructure for it.

Of course, it’s not just the inhabitants stopping me wearing seven layers of shiny black. There’s the climate, too.

And therein, maybe, lies the rub.

Idiocy probably, but it wasn’t until a chance conversation – based around music, unsurprisingly, it’s the undying hub of counter-culture – that I actually equated the groups of dreadlocky hippies hanging around Brisbane’s West End with the dreadlocky metalheads who wander past you at Download. I mean, I loved the hippies dearly, and would certainly have referred to them as ‘alternative’, but I didn’t really mean the same thing. To me, alternative defaults to those people in the first paragraph – little seperatist cliques in school, who afterwards merge into a more holistic community of the darkly-clad and free-thinking. Hippies and surfers, with their chilled-out tunes and rainbow colours, seem intrinsically different.

Which they are. Yes, yes they are. The black-clad have a more overt alliance to the alternative, the hippified a more passive falling-into it. They’re more mellow and less spike, more Marley than Manson, more of an opt-out from the mainstream than a determined opposition to it. Sunnier. But then, they would be, they’ve got the sun.

Being warm 365 days a year has to lead to a different psychology, in the same way that year-round winter can’t be denied as a factor in the Russians’ incessant production of beautiful, lengthy, tortured literature. Australia’s underpopulation – and resulting availability of space – compared to a European city that bustles and wriggles and throws people constantly past one another, rubbing off oddly as they go, is a factor too. Is it any surprise, then, if the key underpinning of any drive to the ‘alternative’ – that basic a-normative urge – has a sort of hippy-er result?

It makes a lot of sense. Aversity to the mainstream may be more likely to manifest as slow acoustic guitar twanged out headily on a beach here, and more likely to spur cold fingers into obsessively technical melodic-death riffs in a Swedish or English cellar, but there is that common catalyst.

Sepultura put it nicely: We Who Are Not As Others.

It’s that urge that makes you laugh with delight when you’re shown something weird. It’s that determination to think twice before accepting the status quo viewpoint – it’s no coincidence that the Alternative of all guises are visible en masse when it comes to ideological marches or cause supporting. It’s that love of the coruscating fear of the new, and the determination to plumb the depths of the archaic, just to see how it measures up to, how it effects, how it’s relevant to now. It’s an inescapable curiosity about what the world is and how would it be if it were other, that manifests itself in everything from art and literature, to derivative fan-fiction and MMORPG addictions (I make no claims that those who see themselves as not-as-others are any more intelligent, beautiful or moral than others. Curiosity is not predicated on virtue).

And it’s not just biker jackets and tie-dye. American hip-hop culture is stultifyingly gross at its mainstream edge (an even stronger example than stadium-rock tedium that the alternative is terrible when it forgets to question), but its proud, primal, vital underground is born of that same beauteous drive. So too the sci-fi freaks and anime cosplayers. So too the anarchists in their gasmasks, or the steampunkers in theirs. All over the fat of the rich western world, there is a thin and crispy zest of those who – at varying levels of effectiveness or nerdiness, usefulness or annoyance, Fucking Hostile or Don’t Worry Be Happy – seek to be in some way, an expression before they are an example.

Nor is this divisive: those from these subcultures, if they’re intelligent enough to rise above the goths-vs-emos cliquiness which arises much too easily, tend to be the most accepting people I know. The most ready to accept the Other, even when the Other is as Other from their Other as it can go.

And, I’m sure it’s obvious, however reasonable I may force my article to be, I have a massive bias in its favour. The weird are the beautiful: The Other are vital.

And alternative culture, while my bones walk in society at all, feels like home.

[note to anyone reading this on the homepage: it really is worth your while reading the comments field, I think a lot of the problems with the article get questioned and — hopefully — ironed out a little]

One unexpected side effect of lockdown is that now I look like a stock photo illustrating a Telegraph article about how millennials ruined the stock market by training avocados to play the ukulele.
Gosling. Gauze limb. Goes limp. Guzzling. Ghostling. Some words sound like other words.
Home office looking pleasingly metal this morning. #homeworking #homeoffice #metallica #jacksonguitars #thelighthouse
It's hard to come by decent Gram content these days: A Quadriptych.
Flowers Are Still Permitted To Be Outside
This swan is very rudely standing on a different, upside-down swan.
%d bloggers like this: