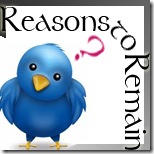 Yes, that is a David Cameron quote as my post title. And yes, barring a horrific injury to my internal irony regulator, this is the last time that will ever occur.

And to turn from one inescapable blue monstrosity to another: Twitter.

I’m not entirely sure what makes Twitter so unlikeable in concept. I disliked Facebook too—for much the same reason, really, an instinctive itch, telling me that it was somehow nasty. but Facebook was easier to rationalise. It seemed superfluous: I already had a MySpace, why get another one (for the very little that it’s worth, I still hold MySpace to be the finest of the social networking trends. Creating a MySpace page, with all the dodgy HTML skills it inspired, was at least a remotely creative endeavour. By comparison, making a Facebook page is like filling out a job application form for a burger chain). But Twitter fills a – marginally – different role. So why the same distaste?

Hugh Laurie, he of “tally ho, my fine, saucy young trollop!” Blackadder fame (and that thing with the hospital), once said of Twitter that “as I look around my friends’ tweets I see banality on all sides. I don’t understand the purpose of it.” There’s a point here: huge amounts of what gets poured into the cybersphere is dross, irrelevant, gaudy trinkets thrown out to magpies who pick it up indiscriminately and decorate it with little comment-droppings of their own. But this is a criticism of the medium as a whole: Facebook comments, MySpace bulletins, WordPress blogs, Geocities sites. Twitter standeth not alone.

Or maybe this is the griping of a prematurely-old fart who learned to communicate before ubiquitous internet. Linguistic studies of discourse tell us that enormous amounts of conversation have little to no semantic content. When we ask people casually how they are, or swap comments about the weather, we are reinforcing social relationships rather than imparting information. My feeling that written communication should somehow be more semantically laden may already be the prejudice of a bygone age. The “LOL, toast again this morning!!” of today is the “fine weather, old chap, what?” of ages past. Its banality is to an extent deliberate: it exists to be said, not to say anything.

But I think my own unbidden shudder at Twitter is the same reason that Facebook repelled me, and less obviously why Apple computers and mp3 players, for all their merits, excite my scorn gland. These things, to use a verb brought to us by Twitter itself, are trending. I don’t like them just as I don’t like Abercrombie and Fitch or Bench to take up the front panel of my t-shirts. Now, I’m not anti-modernity. The thought of technological progress thrills me. I can’t wait to eat in vitro meat from a Dutch laboratory. Nor am I against the mainstream per se. But anything which is popular because it’s popular, the cool thing to have, tends to raise my hackles. There’s just something silly about the sheep mentality. The ipod’s dominance of the mp3 player market far outstrips its functionality.

And Twitter has just this shiny, lusty feel to it. It’s so full of neologisms: tweet, re-tweet, hashtag. I’m reminded of one of the better XKCD comics:

And now, the punchline you’ve all been expecting: I’ve gone and got myself a Twitter. Why? Well, partly because Morgan said “you should get one and then I will follow you, and you will feel popular!” which sounded like a win all around.

But mostly, he admits, sighing, because of its sheer ubiquity. I have no doubt that the site’s role in events such as the Arab Spring was overplayed by technology editors, but it did vindicate its usefulness a little. Besides, I’m getting sucked in anyway: I already check the Twitter feeds of people like Charlie Brooker and D. Randall Blythe every so often, so I can hardly claim to be maintaining a boycott.

And when anything gets ubiquitous, there’s going to be that nagging feeling that you might be missing out. My ambitions in this life are vague, but such as they are, they have a lot to do with being a voice. Entertaining, informing, or telling stories. All of which involve writing words, and having others read them.  And there’s definitely a feeling of expectation now – that if you are in the public domain in any way, if people want to find you, or speak to you, or listen to you talk about toast, they search for your Twitter. So I’ll give this new outlet a shot.

I may get bored of it within a week, and never post. I may get addicted, and never be seen in the real world (which I still believe exists) again. I’ll probably use it like the status box on Facebook, but with my quality control filter turned down, and end up subjecting you all to my very own brand of quasi-articulate banalities. I’ll probably piss off Hugh Laurie no end.

But pshaw! to him. He’s not a real doctor anyway.

3 thoughts on “Too Many Tweets Make a Twat”