…And in the Darkness watch them

Yesterday I watched, with stalwart comrade Rob, the Lord of the Rings feature film trilogy. Extended editions. In total, that’s eleven hours and twenty-two minutes of undiluted Middle-earth. It was a slightly surreal experience – my flatmates who dropped into the room during the latter stages report that we seemed ‘pretty spaced out’, but it did feel … right. The additional scenes in the extended editions don’t add a great deal of new information, but they do add depth to themes already present; Sam’s antagonistic relationship with gollum, Saruman’s defeat at Isengard and Merry and Pippin’s tree-ride all felt better paced in this format.

Additionally, if you watch the trilogy straight through, it’s a lot easier to keep track of individual characters. Given that 90% of the minor characters are long-haired men in beards and armour, it’s easier to keep track of who Eomer and Haldir and Faramir are, and why they matter, if their introduction is still reasonably fresh in your memory. In summary; recommended. But stock up on chocolate raisins. 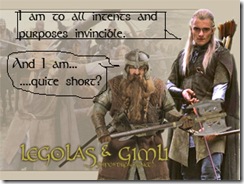 Worlds, and Mirrors of Worlds

The reason, sort of, for this silly afternoon—>evening—>very-early-morning of Tolkien was that he’s one of three authors who I’m analysing in my undergraduate dissertation, due to be finished in a couple of months. The topic is ‘Is a Secondary World by necessity an allegorical or satiric comment on the Primary World?’ which I’m discussing in relation to Phantastes by George MacDonald, the Gormenghast trilogy by Mervyn Peake and, of course, John Ronald Reuel Tolkien’s The Lord of the Rings.

It’s a lot of fun…at least, for me. I’ve got mind-maps (well, one mind map. I got some mindmapping software off www.xmind.net and would highly recommend it for writers of long things. It’s really helped me pull the structure together) and papers and academic tomes littered all over my room, and I’m pretty confident I can get 10,000 words worth reading out of it. It’s coming dangerously close to distracting from my other courses altogether – especially odd, given that one of them’s a creative-writing course. But there’s something far more satisfying in getting your teeth properly stuck into one project than in trying to keep on top of four or five all at once.

This kind of stuff is the reason that there’s been less in the way of journal posts on here. I had a vague notion that people might like to read about me having my eyelids wrenched open by new, startling aspects of my time in Australia. But my main activity of the moment – poring through books with titles like ‘Mindscapes: The Geographies of Imagined Worlds’ seems inherently less reader-friendly, as fascinating as it is to myself. Maybe I’m wrong? If I am, tell me! And you’ll get so much Secondary World literary theory blog that you could actually bathe in it.

One thing I have done recently which wasn’t analysing George MacDonald’s presentation of determinism was the recent PublishED open mic night. At which I got up and did one ranty poem and one less ranty poem, looking all intense and dynamic like this:

PublishED is a Very Good Thing which came along while I was in Australia. It’s a publishing and creative writing society, who publish a magazine (in which I was lucky enough to have my silly story, Goodnight Sweet Quince, printed [*2]) and put on various events like…open mics and literary fairs and such. There’s a lot of this sort of thing about all of a sudden. It’s like everybody who didn’t take their third year abroad looked around last year and said ‘Right! That’s that lot out of the way, let’s make things work around here!’ – another fine example is the resurgent English Literature Society, who are putting together a yearbook and a motherfucking BALL. A ball! With, apparently, confit duck Gressingham and buttery mash. (Although I’ll confess a note of concern: I bought my ticket last week, and it’s marked ‘#6’. I. I, um… I hope there’s more than six people there.)

The open mic was one of PublishED’s patchier events – they overpriced it at a fiver and it dragged on a bit, so that by the time I got up – as the second-last poet – the vanue had half emptied. But it was still great to get up and get that familiar old buzz. To Rock da mic, as I believe they say (Although Gareth tells me my microphone technique needs work: I go too much for ‘the rock star thing’). And the reaction was good, and I remembered the words, and I was wearing my Adventure Hat and BEING ON STAGE IS THE BEST THING WHICH IS A THING WHICH IS.

The homebrew is good.

There’s no vision THERE at ALLLLLLL

So that’s effectively where you find me. On track for a pretty good degree, only moderately stressed out, and occasionally doing something else entertaining. What else? I went for a long walk today, and didn’t need to wear a coat! Unexpected kindness from an Edinburgh February, not to mention a thrilling story.

Oh yes, and then there’s the future. Apparently you’re supposed to have a plan by this stage of your degree? Screw it. Not all who wander are lost.

But it is nice to have a vague direction to wander in, so the current plan for Aran Ward Sell is to stay in Edinburgh and work for a year, read lots of books, write another book, and then try to fund a Master’s Degree in Creative Writing, which will hopefully help with my own wordsmithery / networking, and also leave the door open to do a sort of Literature-Sociology-Cultural Studies themed PhD a little further down the line. And to travel Europe. And America. And open a beach bar / death metal club on a beach in New South Wales. And possibly – because I’ve still got Howard Shore’s score and Christopher Lee’s intonation echoing in my head from last night – possibly….become a wizard?

[*1] I typed ‘Legolas and Gimli’ into Google image search. The third suggested search was ‘legolas and hermione fanfiction’. Some people just  DO NOT COUNT AS HUMANS. And they all have the internet.