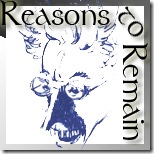 It sits before me, pale, obstinately oblong. My white whale, beached. Ten thousand words fat. Ten thousand words which struggle through three unreal worlds, glance at many others in passing, and attempt to extract from the whole some kind of …conclusion? It’s due in on Tuesday morning.

And I have no idea how to make it better, any more.

I know it all far too well by now, that’s the problem. This is … the fifth draft? It’s like analysing the lyrics to a nursery rhyme; they’re so embedded in your head that it’s difficult to tell when they don’t make sense. I spent Thursday evening reciting my entire dissertation aloud to myself, ironing out flaws in the sentence structure and making my flatmates exchange ‘poor thing, he’s finally lost it’ glances behind my back. I could probably quote some passages verbatim. I spent yesterday pacing up and down the kitchen, drumming anxiously on the table and drinking inhuman quantities of tea. At one stage, I tried to role-play someone who absolutely hated me, and figure out what they would say to denigrate the dissertation. In the end, I added one sentence.

And yet, because of the slightly off-canon nature of the topic (allegory and satire in the Secondary Worlds of Peake, Tolkien and MacDonald), because of a slightly disappointing recent linguistics grade, because of the guillotine abruptness of deadlines, I can’t suppress the panic. What if it’s all completely shit?

I’ve enjoyed writing it enormously. I’ve been a far better student this year than ever before, delving in with gusto and perhaps even aplomb. It’s reinforced my feeling that I could have something to say in ‘the academy’. It’s strongly reinforced my view that Mervyn Peake, with his rambling, melancholic caricatures of people and places, his determinedly unfashionable meandering, his lusty eloquence, is one of the most worthy pen-wielders that English literature has known. Will Self, in an intensely enjoyable ‘alternative Good Friday sermon’ at the students’ union, was asked who his favourite character in fiction was. He named someone from Dostoevsky, another Russian who eludes my memory completely, and Dahl’s Mr. Twit. On one of my many self-distracting walks yesterday, I wondered what my own answer would be. Yossarian. Sam Vimes. Stephen Dedalus? Certainly Peake’s Alfred (Bernard) Prunesquallor (see image above, Peake’s own draftsmanship), and to hell with it, maybe Fuchsia Groan as well.

That was exactly the kind of mental tangent which my mind is taking off on when I try to think seriously about how to improve my dissertation. Don’t mistake my intent: I’m not saying there’s any possibility that it’s perfect. I don’t even think that it’s the best that I can do. But what it needs, to be improved, is to be put in a drawer for a couple of months, and then revisited afresh. Or, better still, to be submitted, professionally reviewed, and then sent back to me with an editor’s comments. But these are luxuries that the undergraduate dissertation doesn’t allow you (and quite right, too!). Nor do I genuinely believe that it’s completely terrible; that’s a feeling, not a reasoned conclusion. At worst, it’s quite good. But the nerves arrive regardless.

And yet, for now, I may have to accept that what I’ve written, thirty-nine pages of odd musings on reality and unreality, on worlds and on ‘mirrors of worlds’, is the best that I can do right now.