“Whereof one cannot speak, thereof one must be silent” 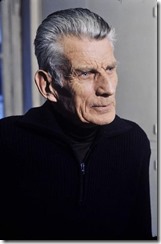 This morning, arising as I did after my flatmate had departed for work (even though he was later than usual in taking his leave, a damning indication of the depths of my sloth), I spent the first part of the day in the manner of a mute.

I have arranged to take the day off work, for there is a talk which I wish to attend, at three.

Not a word I said as I finally arose and waddled my way through the morning routines of the urban man. I do not deny the possibility that some vocal exhalation may have escaped the dim furnace of my mouth, an oomph or an ah as I stretched upon arising, perhaps a sharp hiss of breath through my teeth as I considered the concise crossword in yesterday’s paper. A hnnnnnnm of satisfaction at my coffee and yoghurt. But not a word, after the semiotic model where a word reflects a referent, did I utter. No well it’s a lovely day again, and no good morning.

I settled again in my bed to read, for the talk is not until three and I have Beckett to read for class. I should perhaps have swapped my dressing gown for a shirt more accepted as social attire, and made my way to the union or the library to read. But (though it is a lovely day again) it is cold, and I filled a hotwaterbottle from the kettle, secreted it under my duvet to warm my feet, and resumed my reading.

But there has been a problem with my telephone of late. O archaism! My room contains a landline, a telephone harnessed not to invisible webs of satellite but to a socket in the wall. And yesterday it began, at unpredictable intervals, to bleat.

The most frustrating aspect of this is the inconsistent duration of the bleating. Sometimes it bleats robotically until I make my way to it, lift the receiver, and set it back down. On other occasions it bleats for mere seconds, before resolving whatever inner problem is taxing its electric conscience, and it subsides again into a silence to match my own. It did this a few times this morning as I broke my fast and hissed at the concise crossword. It was annoying, but every time I made to rise to go and quiet it, it ineffably quieted itself.

I could not finish the crossword, though I managed the codeword and the two easier su dokus.

As I returned through the flat with hotwaterbottle under one arm, Beckett in the corresponding hand and a mug (o, gifts of the kettle!) steaming in the opposite hand, the tormenting device resumed its bleat. Like a patient but distant parent I paused, to see if the squalling would squall itself out. This time it didn’t. I realised I was required to set down my burdens and sort the bastard out.

I’m not proud that these are the words that leapt first to my lips. The ejaculation was involuntary. How much finer if I had said, instead: be silent, you! Or perhaps: By the Gods! Would I that cursed din would cease!

I set bottle, book and mug down, and attended to the phone. Receiver up, receiver down, the bleating ceased.

Awhile later, as I coursed through the black joys of Beckett, a sentence made me laugh. The sentence was this: It was as though the Saposcats drew the strength to live from the prospect of their impotence.

It is not, by itself, a funny sentence. But you will trust me enough to credit that, placed in the nest of the surrounding words and the atmosphere which they conjured, the comedy in its sullen cadence was enough to bring from me an unsummoned laugh. A sudden bark of mirth it was, which rang out abruptly and broke the nearby air.

And now the afternoon condenses, and little have I said. Nothing, all day, but a sudden bark of mirth at a dead author, and an obscenity hurled at a machine.

So who can say now that Beckett was wrong? Or Ballard, or Dick? When a young man in the fullness of health and vigour can reach the middle of the day, having acted only in mime, save for this laugh, and that curse, and neither of them landing anywhere near a comprehending ear.

Still, I shall have to dress soon, and let my hotwaterbottle cool, and step out into the world. For it is nearly three o’clock, and I wish to attend a talk.