In 2013 I told the popular literacy-bragging portal Goodreads to ‘challenge’ me to read 52 books, one for every week of the year. When the Great Old Ones invented the internet, did they in their wisdom foresee that it would someday be used for self-imposed litnagging, turned into a cross between a digital alarm clock and Scheherezade?

That year, I failed. I got close, I think. Forty-something.

In 2014, I tried again, and managed it. 52 exactly. Not counting unfinished books, books I’d read before, or books (such as most academic sources) of which I only read selected chapters or entries. Fifty-two previously unbent spines (figuratively speaking – the vast majority were loans from libraries, the remainder gifted, borrowed from friends or bought second-hand), cracked open and their marrow devoured.

It’s not a monumental achievement. I read quite fast, and I work in a library. If I took a kids’ picture book down with me on every fifteen-minute tea break I could get through almost three hundred a year. The ‘challenge’ isn’t to favour quantity at all cost; but it did help as a reminder-nudge to make sure and pick up a new book as soon as I finished an old. Given that a lot of the books I gravitate to are pretty chunky* (David Mitchell’s Bone Clocks, John Carey’s biography of William Golding), stylistically experimental (Eimear McBride’s A Girl is a Half-formed Thing, Frances Molloy’s No Mate for the Magpie) or both (Zadie Smith’s White Teeth, Will Self’s Umbrella and Shark), I think 52’s a decent effort. There’s a few graphic novels in there to balance those out, mind.

For anyone interested in seeing my 2014 in books, you can prowl through it here. For now, I’m going to have a quick prowl of my own, and offer some recommendations and eh-don’t-bothers from my own year in compulsively catalogued reading.

A final quick note: this is books I read in 2014, not (for the most part) books released in 2014. As a ‘books-of-the-year’ list, it’s determinedly egocentric, and makes no pretences otherwise.

Goodreads’ star-rating system makes it easy to glance back and see what I thought of my literary wanderings in the past year. It turns out I gave only three books a maximum five-star rating. One of those was no surprise: this gigantic compilation of Orwell’s ‘As I Please’ articles for Tribune in the 1940s. Orwell’s excellence as an essayist is renowned, and here was a whole brick of them. Pleasingly, the other two books I top-rated in 2014 were both recent, both potent and important, and both instantly became books that I recommended to all and sundry. Neatly for this article, one was fic, one non-fic. So here they are:

Best Fiction: A Girl is a Half-formed Thing by Eimear McBride (2013).

I picked this up with a vague notion that it was Joycean in influence, had collected a few prizes, and had one of those not uncommon backstories whereby trillions of publishers rejected it over a great many epochs, before some little press somewhere had the courage to print it and everyone suddenly realised it was brilliant.

Including, once I’d adapted to the harsh, heady flow of its confessional stream of consciousness, me.

I say ‘confessional’, not a term I tend to use positively. Yes, this details the protagonist’s suffering, including harrowing sexual and psychological experiences, in painful detail. Yet it manages to do so without the self-pitying undertone which tends to accompany the confessional mode. Much of this is down to that Joycean strain; McBride understands that for the true stylist, style is inseparable from content. The two inform each other, feed each other, imbue one another with fierce vitality. This story of a girl growing up in the West of Ireland with a mentally ill brother and a fragmented family is shocking, and at times repulsive – not gratuitously, but through the power of its story, and the ferocity of its ability to transmit the protagonist’s subjective apprehension of her own traumatic life.

note: the ‘highly commended’ fiction section was nightmarish to narrow down, so I allowed myself to privilege more recent and lesser-known books.

Best Non-Fiction: The Establishment: And How They Get Away with It by Owen Jones (2014). 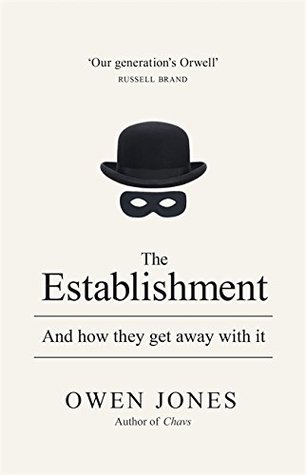 I would not claim this book to be perfect. I would claim it to be vital.

Jones has written a probing critique of who has power in the United Kingdom, why they have it, what it means – and why the distribution of that power is so tenaciously uneven. Jones is no great writer, but he makes little pretence to be. What he is is angry, and rightly so. This book deserves to be argued about, disagreed with, Jones’ interpretations of his sources picked over and discussed, his Labour-centric view of the British Left challenged, his conclusions dubbed too militant by some, not militant enough by others. As a trenchant, accessible primer to the corridors of power in Britain, it deserves to be read.

Orwell in Tribune: As I Please and Other Writings 1943-47 – see above. William Golding: The Man Who Wrote “Lord of the Flies”, John Carey (2009) – satisfying biography of a superb writer and troubled man. The Most Dangerous Book: The Battle for James Joyce’s “Ulysses” by Kevin Birmingham (2014) – solemn account of prudish censorship’s attempts to stifle artistic genius. Chavs: The Demonization of the Working Class by Owen Jones (2011) – good companion piece to The Establishment, shows the sneaking prevalence of snobbery in modern society.

By rights, this ought to be a much more enjoyable category to construct. However I’m hamstrung by reading books because of recommendations, or reviews, or their being on course reading lists, or their looking like they might be good. As such, the pot of scathe which I have to pour is not so full and gloopy as it might be if I’d spent the year hunting down dross. I awarded no Goodreads one-stars in 2014, and many of my two-stars weren’t rubbish, just disappointing: Jeanette Winterson’s The Daylight Gate had an appealing gothic flicker, that never burst into flame. Terry Pratchett’s new non-fic collection had some fine essays, but was appallingly curated, with many of the articles on fantasy being close to identical. Even Russell Brand’s Revolution (the fifty-second book of my fifty-two), dismal in its attempts to articulate an inevitable, no-effort-required, faith-based and apolitical cosmo-communism, was sweet and kind in describing social ills: the sections linking drug addiction and consumerism, depicting the young Brand haunting the hollow temple of Lakeside shopping centre because he knew something was missing, and society told him that shops could fill the void, were lyrical and touching.

This book is much better written than many books I rated higher. Amis is a rakish technician, whose confident prose never lacks verve and panache. But this novel is cruel, and not against the cruel. It jeers at the English working class, elevates one of them to a position of wealth only to mock him for his inarticulacy in the language of the wealthy. Lionel hefts a razor in his hand in a fancy hotel and notes how heavy everything is in the world of the rich; the weight of upper-class superiority is too much for him, and he sinks back into plastic disposable squalor. Amis offers a sop: Lionel’s nephew is working class and nice! His niceness is rewarded with a place in the middle classes, to whom it is made clear he innately belongs. The sop lacks sap. A vicious slice of class warfare, which makes one wish Amis’ talents had been bestowed upon a finer soul.

Worst Non-Fiction: The Gatekeeper: A Memoir by Terry Eagleton (2001).

Not terrible, but deeply mediocre. This book is nothing but vanity spiced with hypocrisy: Eagleton lauds his own proletarian origins, then seeks to place himself as part of a raffish Oxford set. Having his Soreen loaf and eating his gateaux, if you like. Comparisons between the author and the greats of literature and philosophy are rife: Terry is like Oscar Wilde because he makes jokes sometimes. Terry is like Ludwig Wittgenstein because he likes Irish countryside. Frankly, Terry is like Narcissus.

Next up: 2015. I started the year with John Sweeney’s oddly irreverent book on North Korea, and have started John Wyndham’s The Chrysalids. The pile to follow is already topplesized: Smiths – Zadie and Ali – from the library; The Silmarillion and, er, The Gigantic Beard That Was Evil from Christmas; Goldings and Laxnesses and B. S. Johnsons that have been resenting me from my shelves for too long already. Not to mention that I have a dissertation to write this summer, which will slow the BPM (books per month) by necessitating re-reading of several books I’ve read before – and re-reading doesn’t count! I’ll have to raise my game just to tread water.

Still, I can always resort to picture books if I need to make up the numbers.

* I am led to believe that this is consistent with gravity overall.

EDIT: this blog has since been republished by news website ‘Planet News’.

15 thoughts on “The Year When I Read Enough Books”