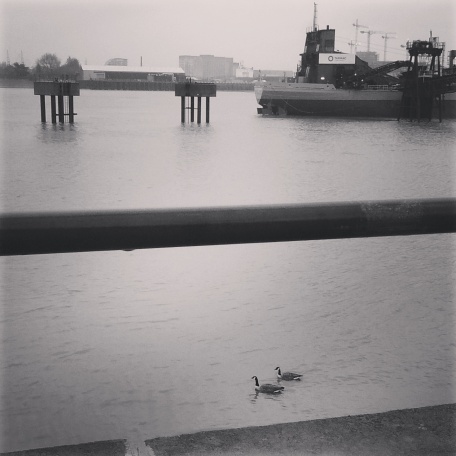 The kid at the bus stop was obviously wasted. He wobbled from one foot to the next like the gravity that held him was a bit drunk too, and couldn’t quite catch onto his feet when they hit the road. I leant my back against the wall and hunched my head over the screen of my phone, aware that he was going to speak to me eventually.

– Hey man, do you know when the next bus into Greenwich is?

We were about twenty minutes walk out from Greenwich, but right enough he looked in no shape to walk. It was ten or eleven at night. He must have been seventeen or so. His voice was forced-casual, a slightly nervous kid trying to sound like he said hey man to strangers at bus stops all the time.

I pulled up a bus tracker on my phone and gave him the information. It would be here in five minutes. This didn’t seem to register. He was looking at me; my leather jacket I suppose, my facial hair and necklaces and black jeans. My fashion sense hasn’t matured a lot in the last ten years, so I look a lot like what a drunk teenager in a band t-shirt thinks they’ll look like when they’re a bit older. Most of them will think better of it. They’ll cut their hair.

I couldn’t disengage back into my phone in the face of his keenness. I looked up and gave him a nod. Said something.

– You’re cool. I wish more people had long hair like us, said the kid. I’m sorry to keep calling him a kid. He was around the age of majority and I certainly don’t mean to condescend. But you’ve never seen a young man who was more of a boy.

Why, I asked him. Why shouldn’t we be the only ones?

– Because people say, like, they think it’s just for girls and that, he said. I should have said something positive about gender normativity. I did, sort of.

– Fuck ‘em, I said. Let them think what they like.

Our repartee stalled a little. He apologised for being so drunk and asked me if I drank. I said I did, sometimes, and I hoped he’d had a good night. I checked the bus tracker. We were waiting for the same bus, but I was meeting someone off it, not getting on. The kid wandered over to the bus stop pole and scuffed his trainers against it. He wobbled back.

New slang on me, but not hard to guess. I said I didn’t, and I think his opinion of me fell a notch. Which left it pretty high, still. We were the long-haired guys.

Maybe he was older than I’d thought; maybe he started young; maybe he added a year or two on to sound cool; maybe all three.

I made some crack about needing time to sleep, or something. His face was blank and I felt cruel and sardonic. I was making a joke of a deliberate misunderstanding and, in the words of Bill Watterson, the kid’s train of thought was still boarding at the station. The bus came around the corner.

– You’re cool, man. I wish more people were cool like you. That’s how he said goodbye. We touched fists and I told him to take it easy and get home safe.

“I think you should have smoked that crow,” said Benjamin Disraeli to me several days later. “They’re filthy, noisy birds. Do ‘em good to get a short sharp smoking.”

We were strolling by the banks of the river, cataloguing waterfowl. Disraeli must have had birds on the brain. “There’s one!” he yelled, spying a brace of coot. Our mutually-held manservant, Sir Launcelot the Brave, scurried over to take their picture for the scrapbook. 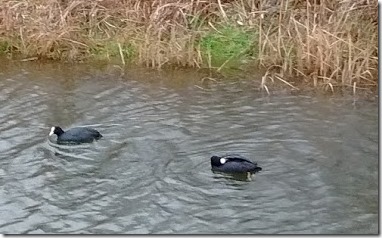 “I rather think you’ve missed the young gentleman’s use of colloquial language,” I told Dizzy. “Besides, that’s hardly the point. The point is…”

“That you got so excited about someone thinking you were ‘cool’ that you needed to announce it to the world under the guise of a weekly blog?”

“That you needed an excuse to split a blog entry into a section where you used direct quotation marks, and one where you indicated speech transcription using the Francophone method of the long dash, favoured by James Joyce?

“That this is somehow an elaborate introduction to that moving recording wherein you speculate on the constitutive activities of mustelid ownership?”

Thankfully, I was spared the need to further recount or create my motivation for describing the scene above. Launcelot had spied a particularly wistful looking goose, and attempted to photograph it in monochrome. But he must have turned the Daguerrotype up too high. Instead of the picture turning black and white, the world had.

The three of us stared around at the newly greyscale Thames, and across at the gleaming towers of Canary Wharf. It was hard to see the difference, to be honest. Benjamin Disraeli muttered something about how disappointing rum babas would be without that piquant hint of yellowness in the cream. Sir Launcelot fiddled with the settings on his camera, and I shuddered lest he should trap us all inside an Instagram filter for eternity. Not X-Pro II, I begged the universe. It’s far too harsh. In the nearby seventeenth century, Christopher Wren was showing his young husband Christopher Robin around the planned site for the Royal Hospital for Seamen at Greenwich. 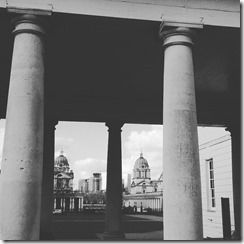 And I brushed my long hair behind the collar of my jacket, and thought how desperately glad I was that not everybody was just like me.