Hard not to imagine – as I always imagine, as one is virtually obliged to imagine – the splinter of bones if I fell from this great height.

Looking down onto the patchwork fields and the pulsing circuit-boards of conurbations you can divide the floor – the ground – the land – neatly into those places where human live, and those places where humans grow their food. There really is no room left for anything else, for any animal or weed that cannot survive in either towns or fields. 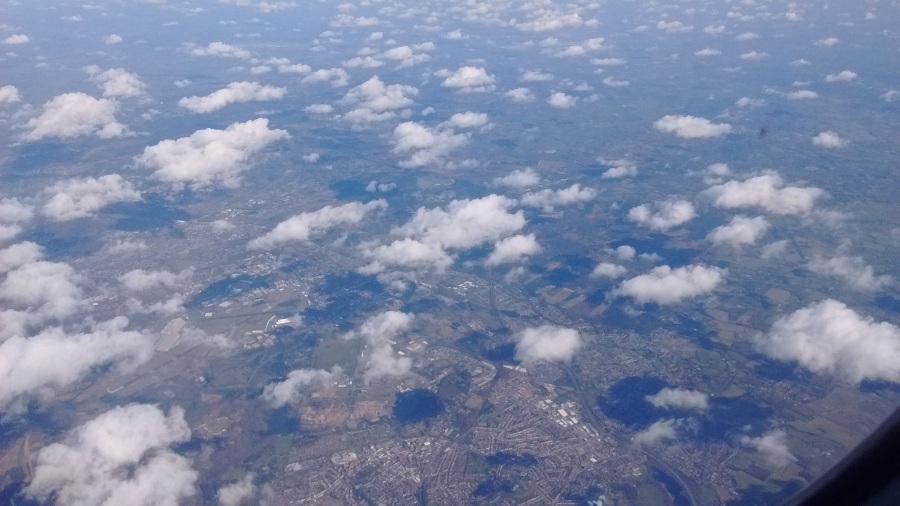 We tell ourselves that the fields and farms and hedges are the countryside and over time become so accustomed to the town that the country comes to mean the wild, but it is not, it is not the wild. It is sterile and fit for purpose as a vast horizontal food factory. Would wolves even want to pace these flattened forests? Would the reintroduction of bears (were there ever bears?) and beavers be only patronising, or also a betrayal?

Run free in the wilds, you beautiful predators from the hinterlands of my species’ ur-history. See, we have kept you a forest.

See, we will keep you safe.

I am in the sky and soon I will be over the sea. Nothing lives in the sky although planes and migrating geese may pay it fleeting calls.

If there is hope, perhaps it lies in the sea. However. And the wolf cannot live undersea.

2. A harbour in Dalkey

Private residencies keep you at arms’ length from the shore. Gated communities and big houses with back gardens all have signs to let you know you are unwelcome. But if you follow the little road around to the left, at last you come upon a small harbour, which smells of harbours. Somebody’s dog, a beautiful dog, wants to play fetch with whoever will play, and whatever comes to hand. We laugh and toss him a cable tie until it skitters over the harbour wall. Thankfully he doesn’t skitter after. I find a stiff bunch of dried bladderwrack and we throw him that instead.

The water is iced with gulls. I lie on my belly with my camera in my hands and try to focus on them. They squabble on the rocks and bob grumpily on the water. I sometimes experience a strange sensation, psychologically, in the presence of wildlife. A disorienting rush of privilege, that I and they share a space and there is nothing between us but air there is no windows and no bars and they are here and I am here, I am here as well.

Herring gulls, with the best will in the world, are pretty mundane creatures, and unlikely to inspire such starry eyes. But I maybe feel some tinges of it already, that birdwatcher’s gawp, before I hear the exclamation and look up to see and the head of a seal is broaching the surface.

I am plunged into the present-tense, more deeply than before.

Huge and glossy, the seal alternates a few minutes under the water, nosing around at the base of the harbour wall, with a few seconds taking the air. The gulls don’t like it and they flock to a safer distance. One militant gull tries to dive-bomb the seal beak-first. It doesn’t seem perturbed.

When the seal’s head surfaces again, it’s eating a fish. Something pale and flat – a plaice or a skate or a dab or a flounder.

It takes us a long while to realise that the seafloor where the seal is nuzzling, at the base of the wall outside the harbour, is coated with the dead white bodies of these flatfish. More than the seal could eat in a month; so it just has to choose one, and surface, and rip a few bites of flesh from the fish’s long spine while the gulls circle warily. Sink below the ripples, and repeat. 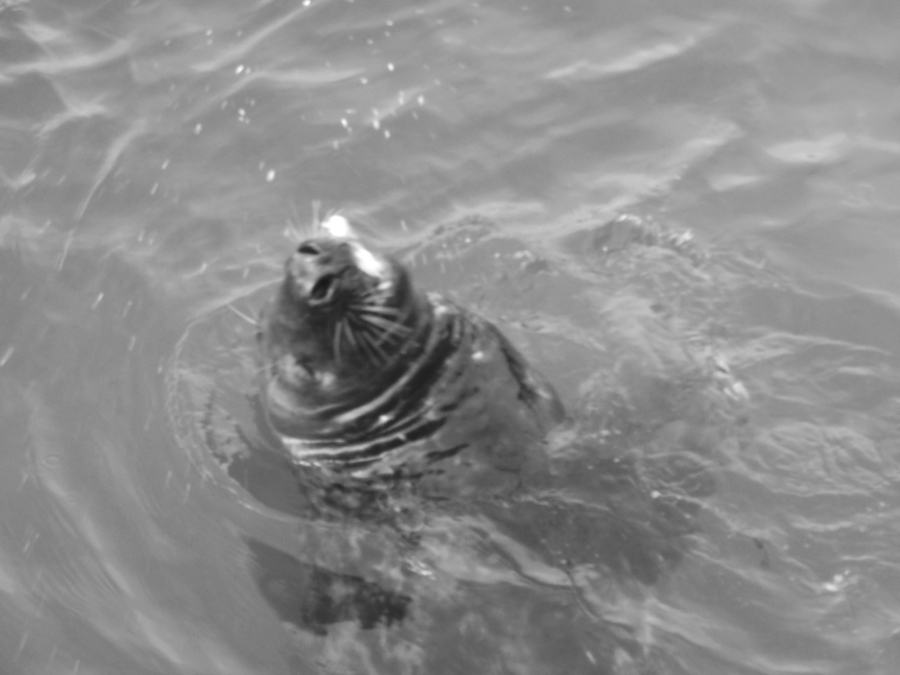 Maybe the fish exceeded a fishing boat’s quota, and were chucked over the harbour wall for that reason. Maybe something was wrong with them. Maybe the van to pick them up from the boats was late and they had to be got rid of because they started to turn.

Whatever the reason, they line the seabed as though dropped from a great height – from a plane – and stunned upon the rocks. And the seal accepts them, and ducks its sleek head under again and again. Half-wild, like an undersea wolf just beginning to turn dog. It feasts from the buffet.